Lambda Energy can best be described as a “Platform IP” business, that is, a company whose technology can be applied to a range of end uses, and where the IP on our technology will be licensed to a leader or leaders supplying finished products to each end-user market. Manufacturers will produce our active materials using their own production facilities.

Our advanced nanomaterials are designed to efficiently convert incident high-energy (UV, blue, or green) light into lower-energy (orange, red, or infrared) light, a property which is sought after in a wide variety of fields.

Our primary focus is on development of new nanocrystals which will perform down-conversion, shifting the spectral distribution of light energy from short to long wavelengths. We are exploring two types of down-conversion, Luminescent Downshifting and Quantum Cutting.

We are synthesising nanocrystals in-house using our labs at the University of Cambridge and incorporating them into polymer films. Through a process called doping, adding small amounts of other elements into the nanocrystal core, we expect to obtain materials with Luminescent Downshifting and Quantum Cutting properties.

Lambda commenced a UK-government funded project under the Energy Entrepreneurs Fund in October 2021, in partnership with academic partners from the University of Cambridge and the University of Bath. This project will develop Quantum Cutting nanocrystals with a primary focus upon Solar PV.

Prof Dominic Wright has expertise in broad areas of synthetic inorganic chemistry and is experienced in bottom-up synthesis of photonic and energy materials. He is the author of over 360 papers and book chapters and named inventor of at least eight international patents.

Lambda has been working closely with Dominic’s research group since the beginning of 2021. Under this project his group will isolate candidate materials for down-conversion, following an alternative synthesis approach to Lambda’s in-house nanocrystal development.

Petra is a Senior Lecturer within the University of Bath with 18 years’ experience working in the area of advanced energy materials and photovoltaics. She leads a team that includes experimental materials chemists and engineers who investigate and characterise new light harvesting materials and test them in lab-scale photovoltaic devices. Her team recently developed a ﬂow synthesis reactor for the large-scale room temperature preparation of perovskite quantum dots and are currently extending the technique to include Quantum Cutting nanocrystals.

Petra was a key partner alongside Lambda in our two completed Innovated UK projects. Under this project her group will encapsulate the down-converting nanocrystals to achieve long-term stability.

Steven is a theoretical physicist with a broad range of interests in quantum mechanics and its applications to materials, with a focus on the nanoscale. His current research areas are the physics and properties of energy conversion (thermoelectrics, photocatalysts, and solar power), the physics of interfaces and the physics of nanomaterials (including the fundamentals of heat and electronic transport).

Steven has been engaging with Lambda since the company’s formation in 2018. Since then, his group has gained considerable experience in modelling of down-converting nanomaterials for Solar PV. His team models aim to predict the wavelengths at which a nanomaterial will absorb and emit radiation. These models, running on Exeter’s supercomputer, will allow Lambda to identify and optimise the most promising nanocrystal compositions.

Measurement repeatability is one of the most critical technical aspects for an advanced materials company. We measure the electrical performance of our down-conversion materials using a simulated light source and a representative PV cell.

We took advantage of a National Physical Laboratory (NPL) programme, Analysis for Innovators, to quantify the error budget for our test rig. We are therefore highly confident in the accuracy and repeatability of our measurements.

The NPL is the UK’s National Metrology Institute, a world-renowned centre of excellent for scientific measurements. We are continuing to use the NPL to perform confirmatory measurements of our down-conversion prototypes. 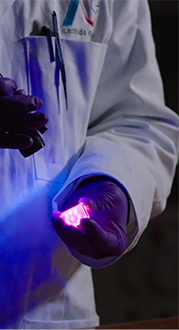